Before the Coronavirus pandemic wreaked havoc on almost all sectors of the economy, Canada boasted of a strong labour market. Canada employment statistics have reported that all the key indicators of a strong employment scene were at play here, making it one of the world’s wealthiest nations.

Speaking of indicators, they are:

✔️ The ready availability of jobs

The global pandemic spelt out a long winter of quarantines and restrictions. Thousands of workers faced reduced hours or layoffs, sending the unemployment rate in Canada through the roof. Select industries – tourism, food service, and retail, among others – took a disproportionate hit.

All in all, Canada’s job market suffered historic lows. Things haven’t been this bad since the Great Recession.

Let’s take a closer look at the latest stats and facts to gauge the effect of COVID-19 and see how the market may recover. 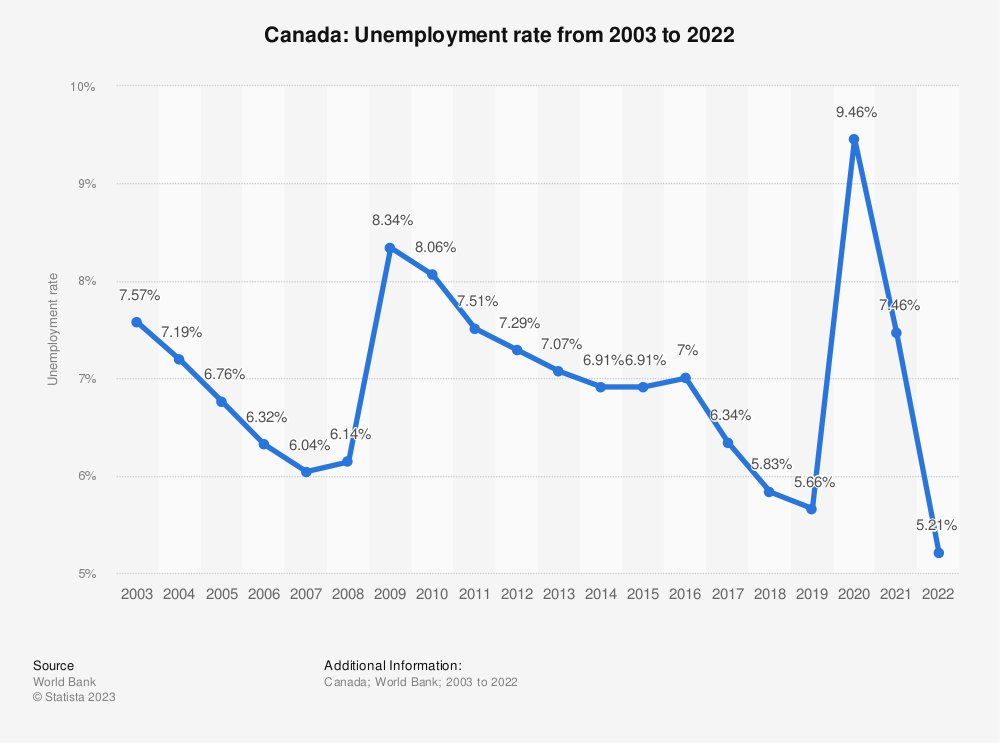 Labour Market Trends in Canada in 2021

Which aspect of employment was most affected?

Over 5.1 million Canadians work from home. This accounts for 30.6% of the total workforce. Remote work was a rising trend even before the pandemic, with more and more people opting to work remotely at least a couple of days a week. So, it looks like it’s here to stay long-term, even as restrictions are lifted slowly and things start to return to normal.

As the third wave of lockdowns continued in Ontario and restrictions were imposed in several other regions, the number of women aged 25 to 54 who wanted work but did not look for work increased by 28,000. This suggests that some women may have stopped looking for work because of adverse working conditions.

The involuntary part-time rate, or the share of part-time workers who would like to work full-time, is a vital indicator of overall labour market conditions.

How does it affect the typical employee?

Failure to obtain full-time jobs can have a range of effects on workers, including financial strains and setbacks in getting experience. Additionally, employee engagement is likely to drop.

Men (26.3%) had a greater rate of involuntary part-time work than women (20.5%), Canada job statistics confirm. This figure has risen since the start of the pandemic.

7. Underutilization is another rising trend, at 17.6% in May 2021, Canada labour statistics reveal.

Labour underutilization simply means a higher number of employed people were forced to work less than their usual hours. This new trend complemented the Canadian unemployment rate during the COVID-19 crisis.

Here are the various components of labour underutilization that remained high from February onwards as per the Canada employment report:

8. Very little changed when it comes to the overall unemployment rate, which was 8.2% in May 2021.

Canada employment statistics reveal that the number of people facing temporary layoffs was steady in 2021. Unemployment stood at 9.4% in January, considerably lower than the overall peak of 13.7% in May 2020.

Ontario tied with Nova Scotia for the largest gap among provinces. Its unemployment rate was 9.3% in May 2021.

On the other hand:

Youth unemployment in Ontario was at a worrying high of 27.8%.

Returning students aged between 15 and 24 in Ontario witnessed an employment rate of 35.4%, which was a massive 10 percentage points down from 2019.

12. A province-wide lockdown in April 2021 in Nova Scotia yielded the largest decline in employment by 4.8%.

This decline accounted for a massive figure of 22,000 people facing layoffs. The job losses spread across demographics and affected both part-time and full-time workers.

Nova Scotia recorded an unemployment rate of 9.8%. It was concentrated in industries like retail, education, and food service.

13. Canada job creation statistics reveal the labour market added 259,000 jobs in February 2021, recovering most of the jobs lost in the previous two months.

This gain in employment was the largest since September 2020. As a result, it far outstripped economists’ predictions of 75,000 new jobs and a 9.2% unemployment rate. Part-time and full-time employment grew, and long-term unemployment decreased by 9.7% from a peak of 512,000 in January 2021.

As schools and other workplaces reopened in various provinces, the number of people working at sites other than home climbed by 600,000 among those who worked at least half their regular hours. 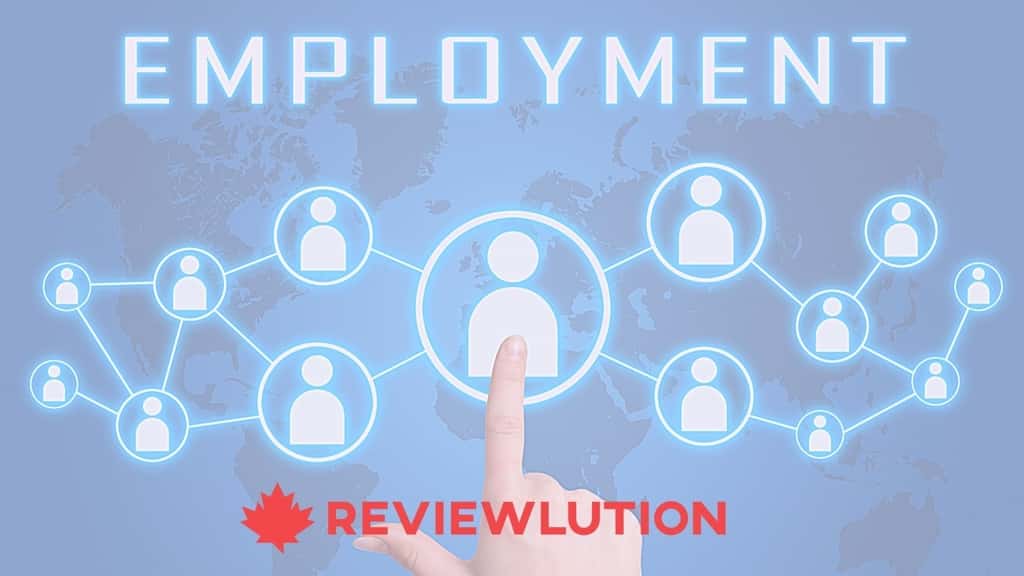 14. Stats on Canada employment reveal more Canadians work in wholesale and retail than in any other industry (2.7 million).

Let’s take a look at some of the leading sectors and how many people they employed in 2020:

Other notable employment sectors in Canada are transport, food service, information and recreation, and agriculture.

15. Labour productivity in the manufacturing industry decreased by 1.5% between 2018 and 2019, Canada employment statistics for 2019 confirm.

(Source: Government of Canada, 150 Stan Can)

Labour productivity increased by 0.6% in 2019. In 2020, this sector employed a total of 96,625 people, according to Canada employment statistics.

97.3% of these establishments had fewer than 100 employees. Additionally, Canada labour statistics reveal that people in this sector received an average hourly wage of $28.4.

Canadian employment statistics further reveal retail trade recorded 29,000 jobs lost and Other businesses had a cut down of 24,000 jobs.

Transportation and warehousing (+22,000) and natural resources (+8,600) both had increases in employment.

Natural resources is the industry that has recovered the most post-COVID, with employment up 29,000 (+9.3%) from February 2020 levels. Click To Tweet

19. Gender differences have crept up in Canada’s job market during the pandemic, with women suffering 62.5% of employment losses.

This could be related to the distribution of family obligations in homes, as well as the fact that many people viewed limitations as temporary. Between spring and fall 2020, the losses were more evenly distributed.

Altogether, women accounted for 53.7% of the year-over-year job losses during the study period.

In April 2021, Ontario and British Columbia showed a marked decline in youth employment numbers. Employment figures for Canadians aged between 15 and 24 fell by 101,000 people.

Canada’s employment rate for those aged between 25 and 54 showed a rise in February and March; however, it fell again due to stricter restrictions in April. So, a decline of 48,000 was recorded, with the highest losses among full-time working women.

At the same time, the unemployment rate among Canadians who were not members of a visible minority group or native populations declined 0.6 percentage points to 7.0%.

The Great White North has consistently been among the developed countries with the highest employment rate. Services, manufacturing, and the natural resource industry, Canada’s three core industries, operate together as one engine and determine the country’s progress.

Tourism, education, retail, and restaurants have been hit the hardest by the virus’s spread. The daily loss of companies is intolerable, and the road to recovery will be even more difficult.

COVID-19 has had a negative impact on both women’s and men’s work markets. Young adults aged 14 to 25, unmarried persons, married people without children, the elderly, and less educated people aged 55 and above have all seen a drop in hours, job loss, and low income.

There’s light at the end of the tunnel.

Looking at these Canada employment statistics, it’s good to see job growth in Canada midst of one of the country’s worst economic downturns. At the same time, it’s worth noting that businesses are still unwilling to rehire workers at full pay for full hours.

Does Canada have high employment?

How many employees does Statistics Canada have?

The number of full-time employees in statistical agencies in Canada is 5469, while 456 people work part-time.

Why is unemployment so high in Canada?

The latest Canada employment statistics place the unemployment rate at 8.2%. This increase can be attributed to job layoffs due to the COVID-19 pandemic and the rapid replacement of employees by AI technology.