We hear more and more about cyber attacks, large-scale hacks, and cybersecurity. It’s as if the hackers are always one step ahead. And this is why cybersecurity will remain one of the most important aspects of national security around the globe, as cyber crime statistics make clear.

It’s not only about cyber theft and ransom attempts that target individuals. Recently, we saw how a whole country could be affected by cyber crime – when in May 2021, an entire section of American fuel pipelines came to a halt as a result of a successful cyber crime attack.

High-profile cyber crime cases have long ago become very common, breaking new topics. And it only looks like we’re going to see more and more of them.

To make sense of this worrying phenomenon, we’ll focus on cyber crime in Canada while also offering relevant global stats that will help us understand the Canadian situation better.

1. 65% of global data breach cases are linked to identity theft.

We’ll see later why even though identity theft is most common by far, it’s not necessarily the most damaging and debilitating for society as a whole, especially compared to other types of cybercrime.

It seems like China has a serious cybersecurity problem. The next biggest financial loser is Brazil, with US$22.5 billion lost in 2017 due to bad handling of cybersecurity issues.

Worldwide cyber attack stats show that the US (US$19.4 billion) and India (US$18 billion) are Brazil’s closest followers. Canada seems fairly secure compared with other developed countries, with US$1.5 billion lost in 2017 due to cyberattacks.

On average, the victim of online crime lost around US$142. 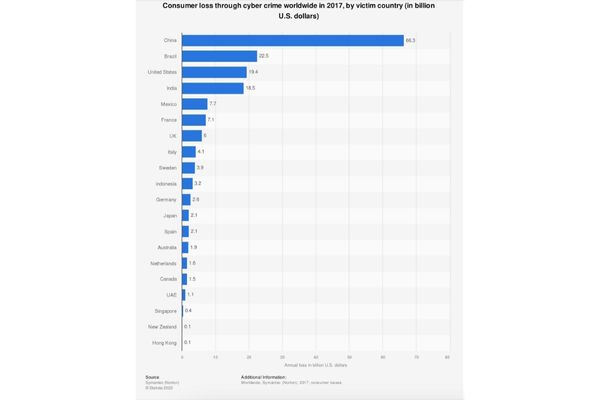 The sheer number of data breaches doesn’t necessarily correlate with the number of records exposed.

In 2017, the number of data breaches was by far the largest in the last few decades. But the number of exposed records – 197 million – was pretty low.

According to the US cyber crime statistics from 2020, the largest breach was the Yahoo! 2013 debacle, when information linked to 1 billion accounts was exposed thanks to a successful cyber attack.

4. 58% of Canadian organizations subject to cyber attacks were targeted by phishing.

Cyber attacks statistics reveal phishing was the most common type of cyber crime in Canada by a considerable margin. Further, 45% of organizations were targeted by malware, network scanning (20%), brute force attack (9%), a man in the middle (9%), and other techniques.

5. Another set of Canadian cybercrime statistics shows that asset misappropriation (32%) was the most frequent outcome of online crime.

It was followed by disruption of business (29%) in second. Extortion (23%), procurement fraud (7%), Intellectual property theft (4%), political attacks (2%) were also motives for significant proportions of security breaches in Canada.

6. 30% of Canadian companies experience up to 20 cybersecurity attacks every year.

That being said, 28% of surveyed companies didn’t experience any cybersecurity attacks. Additionally, 9% of companies are frequently victims of hacking in Canada, experiencing more than 20 attacks each year.

Canada cybercrime stats show that the majority of companies experience difficulties as a result of online crime. Click To Tweet

7. As of June 2016, 65% of Canadian organizations didn’t experience any ransomware attempts.

As far as ransom attacks are concerned, we see that Canadians don’t experience them that often. 27% experienced up to 5 ransomware attacks, 7% from 5 to 10, and 1% from 11 to 10. However, coupled with identity theft statistics from Canada, we see that the cybersecurity situation in this country is far from perfect.

At the same time:

We see that people report cyber crime in Canada more and more frequently, which is also one of the global cyber security trends.

9. Ontario has the most cyber crime incidents of all Canadian provinces – 25,957.

This doesn’t come as a surprise, as Ontario is one of Canada’s most developed and populous provinces. Next comes Quebec, with 6,638 incidents. Other provinces like Manitoba, Saskatchewan, and New Brunswick are experiencing cyber attacks less often.

10. Identity theft Canada cases are fairly uncommon – only 2% of users experience this type of cyber attack.

According to internet statistics from the official Canadian Internet Use survey, 57.3% of Canadians experienced at least one incident involving online security. 48% received fraudulent emails and other types of fraudulent messages. 18.7% experienced redirections to fraudulent websites. Virus and malware are the main methods of cybersecurity breaches in 11.4% of surveyed participants.

Credit card fraud statistics from Canada show that around 6.2% of users experience this issue.

5.7% had their accounts hacked, with 4.5% experiencing cyber-ransom. Stolen identity in Canada, at least in the sphere of cybersecurity, is pretty rare – happening in only 2% of the sample. 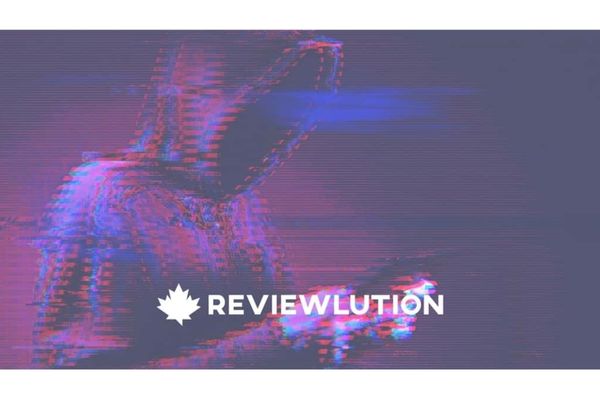 According to the Royal Canadian Mounted Police (RCMP), this unified system will help authorities to establish links between similar crimes and improve the identification of criminals and prioritization. Finally, it will help coordinate investigations in different regions and provinces of Canada.

12. Canadians mainly respond to cyber incidents by changing their passwords (34%) and reporting the incident to a platform or company through which the incident happened (25%).

20% tried to improve their cybersecurity by upgrading or purchasing a security software package. 17% deleted the accounts that were involved in cybersecurity breaches. A further 15% paid more attention to the terms and conditions of platforms they are signing up to.

Cyber crime statistics reveal 13% changed their credit card number. 6.1% reported the incident to their internet provider, and only 4.6% reported the cybersecurity breach to a government authority.

We see that the level of cybersecurity awareness is still rather low even in a country like Canada, with people rarely reporting the difficulties they experience online. This is at least partially because most cyber incidents are relatively trivial. So, people don’t want to spend even more time on the nuisance they already experienced.

However, Canadian internet laws are pretty straightforward, and various types of online actions were outlawed a long time ago.

It’s not likely that all these incidents involved digital technology and the internet, although the new technologies have made identity theft even easier.

Because a lot of people affected by this type of crime are unaware that they had their identities stolen in the first place.

The whole point of identity theft is to remain undiscovered for as long as possible. So, these estimations should be regarded as the lower boundaries of confidence rather than as the exact number of identity theft cases in Canada.

Quite often, scammers and fraudsters mimic the government services – copying website layouts, coming up with domain names similar to official domains, etc. Some scammers pretend to be from Canada’s Immigration Service or Revenue Agency.

According to Canada’s cyber crime statistics from 2021, as of July 28, there are 40,341 scams reported, 28,517 victims, and $105 million lost. We see that scams and frauds are becoming more efficient, as the financial damage from 2021 has already caught up with the 2020 financial toll of online scams in Canada.

The worrying thing is:

Cyber crime is on the rise, as is cyberbullying, and we’re all witnesses to the increasingly dangerous online environment. Scams, malware and viruses, pyramid schemes, and spam email and fake profiles are all adding up to make the internet less safe. Businesses are hit hard by cyber criminals trying to profit from data theft, usually via ransom.

What can you do to battle the rise of cyber crime?
Share your information wisely and report any incident to the government authorities. As we’ve seen, not all crimes are ultimately reported. That’s one of the main reasons we’re not seeing wide-scale actions on national levels against this modern affliction.

What are the Top 5 cyber crimes?

What is the most common cyber crime?

Identity theft seems to be the most prevalent, even though we see quite low estimations of this cybercrime backed by self-report measures from Canadian participants. More specifically, identity theft often goes unnoticed.

How many cyber crimes are there a year?

It is a challenge to combine data from various cybersecurity studies and give an exact number of attacks that happen in a year. Moreover, it’s not always clear what constitutes an attack and who the victims are. To give a general picture of the phenomenon, suffice it to say that in 2019, we had 9.9 billion malware breaches, compared to 5.6 billion in 2020.

Many types of cyberattacks include malware as a technique. However, some don’t, so we can presume that the numbers given above are the minimum of cyber attacks committed each year globally.

How many cyber crimes are committed each day?

This is an even more challenging estimation to make. According to cyber crime statistics coming from Cobalt.io, there are around 2,200 cyberattacks each day. Same as before, we have to point out that this estimation highly depends on how you define a cyber attack. Some cyber crime attempts rely heavily on so-called social engineering. That’s because even the best hackers have to rely on their social skills to get the info they need.

How to report cyber crime in Canada?

You can report cyber crime to the Canadian Centre for Cyber Security, which deals with all kinds of attacks.