Driving under the influence is one of the leading causes of violent deaths around the world. Serial killers, armed robberies, and hostage situations are certainly very dangerous.

However, they’re much more frequently seen in movies than in real life. On the other hand, DUI is a pervasive issue that very much lurks behind every other corner.

That’s why we dug deep into the latest drinking and driving statistics from Canada. We looked into DUI frequency, the death toll, and the country’s most important actions to tackle it.

Although our focus was mainly on drinking and driving statistics, we also examined impaired driving facts in general. Remember, alcohol is not the only substance that decreases your driving abilities.

2. Facts about drinking and driving reveal that up to 69% of road fatalities in some low and middle-income countries are linked to alcohol.

It’s true that not all road injuries are linked to alcohol. However, alcohol is quite often the major contributor to fatal driving accidents, especially in developing countries. In fact, this percentage rarely falls below 20%. And let’s not forget that millions more serious injuries linked to drunk driving occur each year.

Overall, the World Health Organization estimates that around 188,000 road accident fatalities are caused by alcohol, which is the lowest possible estimate.

We’ll see that Canada, like many other countries, has an alcohol blood percentage limit. That’s because research shows that any quantity of alcohol is potentially dangerous on the road. Often the effects of small doses of alcohol are hard to notice. However, they can make all the difference between life and death.

4. In 2013, there were around 40,000 drug-related road traffic accident fatalities worldwide.

Drugs also reduce one’s ability to drive effectively. In light of the legalization of marijuana in Canada, this has become a significant topic in the last few years. However, due to a relatively lower prevalence of abuse of certain drugs (like cannabis) compared to alcohol, it’s still early to say definitively which is more dangerous on the road.

However, we do have certain figures to lean on:

Besides being readily available, amphetamines often lead to more irrational decisions and more aggressive driving, resulting in more deaths. When looking at driving deaths per year due to drug use, we see that cannabis comes next (22%), followed by cocaine (14%) and opioids (13%).

There is a myth that cannabis doesn’t impair driving, but this is not true. Attentional problems linked to cannabis abuse are as dangerous as the lack of coordination or recklessness caused by alcohol.

6. Even as low a BAC concentration as 0.03 increases the risk of participating in a road crash.

Admittedly, consumption of virtually all psychoactive substances increases the relative risk of a crash. But because alcohol is legal in most countries, we have some well-backed stats about drinking and driving. Moreover, the blood alcohol concentration (BAC) allowed by the law is not random – they come from well-designed studies with a lot of participants.

Today, we know that, as the BAC increases, so does the risk of a road accident. And already at 0.09 BAC, we see a fivefold rise in the crash risk compared to the control group. 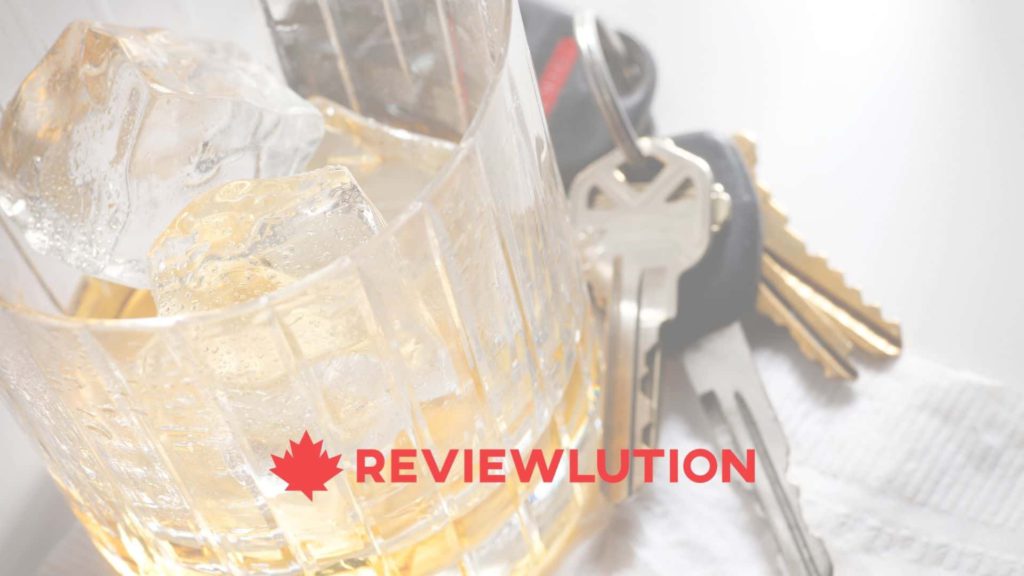 7. Driving with a BAC higher than 0.08 is a criminal offence in Canada.

We have to point out that provincial regulations also define specific measures and fines for drivers below 0.08 BAC. This is important because, on the international level, the BAC level sufficient for any charges is closer to 0.05. However, this doesn’t necessarily mean that Canada’s drinking and driving laws are particularly lenient.

In fact, in most provinces, drivers with 0.05 BAC levels or even lower can get their licences suspended for a relatively short period of time, a minimum of one day. In Ontario, 0.05 BAC is enough for a three-day licence suspension. Moreover, reinstatement usually comes with pretty high fees, and there are also special programs for repeat offenders.

Here are the main categories:

Refusing to provide a sample for testing will result in an automatic $2,000 fine. The severity of penalties for BAC over 0.08 also varies with respect to recidivism and the cause of bodily harm to other traffic participants.

9. Drinking and driving facts from Canada reveal impaired driving causing bodily harm is punished most severely, with a maximum sentence of 14 years of imprisonment.

The Canadian system is relatively successful in moving dangerous drivers off the roads. We see why – penalties can stack up, especially for repeat offenders. And since practically any BAC can be a pretext for a driver’s licence suspension, we see why most Canadian drivers are cautious.

Even though the alcohol driving limit in Canada is somewhat higher, there are severe penalties for drunk drivers, especially repeat offenders. Click To Tweet

In order to reduce impaired and drunk driving deaths per year, the government has introduced specific laws for driving under the influence of drugs.

It’s illegal to have over 5 nanograms of THC per 1 milliliter of blood within 2 hours of driving a car. Additionally, Any level of LSD, psilocybin, cocaine, methamphetamine, PCP, and ketamine is enough to warrant a criminal charge.

11. Drugs and alcohol account for around 55% of all road crash deaths, drinking and driving statistics from Canada reveal.

The most recent drinking and driving stats on this come from 2014. Of the 2,297 people who died in a car accident that year, 1,273 (55%) were under the influence of a psychoactive substance.

Alcohol alone was responsible for 13% of all fatalities, while drugs were twice as dangerous (26%). The combination of drugs and alcohol was a factor in 15% of all 2014 road fatalities.

This is probably the reason we’ve seen new laws that regulate drugs and driving very strictly.

12. Statistics on drinking and driving show that around four Canadians die in a car accident caused by alcohol and/or drugs.

These drunk driving statistics from Canada nicely emphasize how widespread and ever-present this problem is. Although Canada’s system is quite adequate, repeated offenders get their driver’s licences back after serving their sentences (mostly involving jail time). After that, they get back on the road and indulge in drunk driving yet again.

Car accident statistics from Canada are getting more positive each year – mainly due to a robust system of impaired driving penalties.

When we consider global road accident statistics, we see certain trends. Developed countries have very low road fatality rates per 100,000 citizens. In 2019, around 5.3 in 100,000 Canadians died in a car crash.

Knowing that in, say, Cameroon, this rate is 30 and in the Central African Republic 37, it’s easy to see what makes the difference between high and low road mortality rates – better infrastructure, better instruction, and a culture aware of the consequences of impaired driving.

14. Men are more likely to die in a car crash than women.

The average rate across both sexes in Canada is 5.3 road deaths per 100,000 citizens. However’s, it’s 7.3 for men and only 3.4 for women. The discrepancy between male and female rates is even bigger in the developing world, indicating a generally lower availability of motor vehicles to women in developing countries like Cameroon or Zimbabwe.

15. The number of people reporting driving under the influence of alcohol fell from 11% to 8% between 2007 and 2019, Canada drinking and driving statistics from 2019 reveal.

These impaired driving statistics from Canada include self-report measures, so a fair degree of skepticism is needed if we want to interpret them.

It’s crucial to point out that 5% of drivers account for 86% of drunken driving occurrences. In other words, as is generally the case with criminal behaviour, a small proportion of all offenders is usually responsible. These are repeat offenders with habitual drunk driving.

16. In 2019, more than one-quarter of all participants (26%) admitted to having used cannabis two hours before driving a car, drinking and driving statistics from Canada confirm.

We have to remember that cannabis legalization has probably increased the number of people driving under the influence of cannabis.

The rates vary by province:

Saskatchewanians are the most friendly towards the combination between driving and cannabis (34.6%), followed by people from British Columbia (32%) and Alberta (30%).

17. 16 to 25-year-olds account for a third of all impairment driving fatalities.

Teenage drunk driving statistics from Canada show there’s still a lot to be done in this field. That’s why several programs and initiatives aim to educate young drivers about the deadly influence of psychoactive substances on drivers.

However, a more comprehensive approach is necessary, one that encompasses data on all drugs (most of which are popular among the youth) without focusing solely on alcohol statistics from Canada.

Drinking and driving in the Great White North is not a huge problem, drunk driving facts from Canada reveal. However, the job is far from over. That’s why driving under the influence in Canada continues to be severely punished, with severe penalties for repeat offenders. It’s also important to note that Canada’s laws are enforced consistently.

The consequences of drinking and driving are far-reaching and go far above the simple death toll that is used as the most important metric in most studies.

How many people drink and drive in Canada?

Probably around 8% of Canadians drink and drive.

How many accidents are caused by drunk driving in Canada?

64,000 people are injured each year in alcohol and drug-related accidents, but it is very hard to determine the number of impaired driving deaths in Canada.

What percentage of car accidents are caused by drunk driving?

Alcohol is the major cause in 13% of fatal accidents and a contributor (alongside other substances) to 28% of all car crash fatalities.

How many people die from drunk driving?

According to the most recent drinking and driving statistics from Canada, at least 700 per year die from impaired driving (alcohol only, or alcohol plus drugs), with 600 more being caused by drugs alone.