Are you up for an exciting and challenging game of cards? If you still haven’t heard about speed, you’ve been missing out on some serious fun!

Thankfully, we created a guide that will show you how to play Speed and grasp its general rules. We’ll even point out some variations so your games will never get boring.

Speed is a fun and simple card game, guaranteed to entertain all generations. The game’s main goal is to get rid of all your dealt cards faster than your opponent does. That said, this game doesn’t require any fancy techniques, only alertness.

How to play Speed?

The Speed card game setup is simple. To get started, you’ll need:

First of all, both players receive twenty cards each. The cards should be facing down so neither player can see them.

To begin, each player takes five cards out of the 20-card pile they got at the beginning of the game. The five cards make up the hand you’ll be playing from, while the fifteen remaining cards will be your drawing pile.

For the best card deck for speed, check out our list of best playing cards!

For instance, if there is a Queen in the middle-left or middle-right pile, players can only play a Jack (descending sequence) or a King (ascending sequence) next. The Ace can come before the two and after the King. This way, the sequence can continue in a loop.

During a Speed game, there is no time for turn-taking. Both players play simultaneously, which can make the game chaotic. However, that’s all part of the fun.

How to win at Speed?

The game’s main objective is to get rid of all the cards in your hand and your pile. Even though Speed rules recommend playing a two-out-of-three game, most players end up playing over five or ten rounds due to the game’s addictive nature.

The player who gets rid of all their cards is considered the winner of the game. But before playing your last card, make sure you yell SPEED! 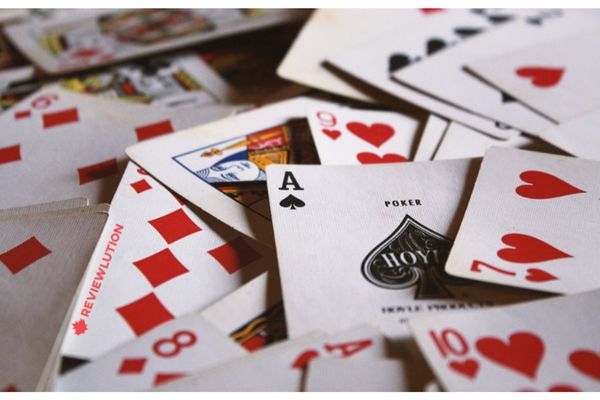 First, players flip the two middle cards in the row. Then, they need to discard cards from their drawing hand to fit a sequence of one of the flipped middle cards.

Both players can add to either the middle-left or the middle-right file. If two players attempt to stack cards in one pile simultaneously, the valid card is the one that touched the stack first, even if it’s only for a second!

Should players have less than five cards in their hands, they can draw from their respective piles. If both players have no more cards left in their drawing stacks, they may draw cards from the far-left and far-right piles. In case they are also empty, you can shuffle the middle piles and start the drawing process all over.

If you want to understand the gameplay thoroughly before playing it with friends, you can try out the Speed card game online!

If the classic game doesn’t do it for you, there are some variations you can throw in to spice up your game.

Before you get Dealing

That’s about it! Hopefully, our guide helped you get a better understanding of how to play Speed. Now it’s time to get your game on and put this newfound knowledge to good use!

See more: How to Play Baccarat

How to play speed card game?

To play speed, you need to be the first one to put your card on the middle pile in sequential order, either increasing or decreasing.