Isn’t it weird how Canada is the second-largest country by land but not by inhabitants? In fact, the population of Canada is not conducive to its size at all!

We decided to dig a little deeper into this topic and gather some striking statistics about Canada’s population through different demographics.

Keep reading to expand your knowledge on the Great White North!

How Many People Live in Canada?

1. Canada is in the top 20 countries with the highest life expectancy.

In contrast, the highest life expectancy globally is found in Hong Kong with 85.29 years, followed by Japan with 85.03, and Macao in third place with 84.68.

On the other side of the coin, the world’s lowest life expectancy is in the Central African Republic, at 54.36 years.

Furthermore, Toronto is the most populated city in Canada, with around 2,600,000 residents. Unsurprisingly, the second most inhabited is Montreal, with 1,600,600 people. The capital of Canada, Ottawa, holds 4th place by population, with 812,129. 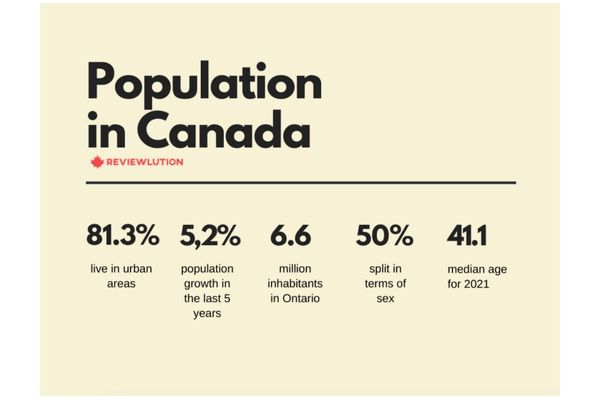 However, we can’t say the same for its cities, as the Quebec City-Windsor Corridor in the provinces of Quebec and Ontario have densities higher than in some European countries.

Fortunately, it seems that Canadians are trying to populate more of their country, as the population has grown by 5.2% since the 2016 census.

Overall, Canada has seen steady growth and decline through the years. As a matter of fact, their growth peaked between 1990 and 2008, when the population increased by 5.6 million, equivalent to around 20.4%.

According to the data from the 2021 census, Ontario was the leading province by single people, with over 6.6 million singles. Quebec holds second place with 4,670,105 singles, while Yukon had only 23,429.

Unfortunately, Saskatchewan got the short end of the stick, with a population growth of only 0,23%. Furthermore, this is the lowest in all of Canada, according to the 2021 census.

In contrast, Prince Edward Island marked the highest population growth in 2021, with 2.81%.

7. Canada’s people show an almost 50% split in regard to sex.

Canada’s population demographics show that the split between men and women is almost equal, with 19.01 million men and 19.24 million women.

Additionally, on the question of how many adults are there in Canada, data shows that 10.42 million adults between the ages of 25 and 44 currently reside in the country. Moreover, these adults generally live in regions close to the main cities.

Furthermore, the median age is highest in Newfoundland and Labrador, at a staggering 47.8, while the lowest is in Nunavut, at 26.5.

It’s no secret that there are many nationalities and ethnicities in Canada, over 250, to be more precise.

Therefore, Canada’s ethnic demographic shows that Indian and Chinese are the dominant ethnicities, with over 600,000 persons each. Next, we have 588,305 Filipino residents, followed by 499,115 Brits.

As it turns out, Canada appeals to many different types of people. 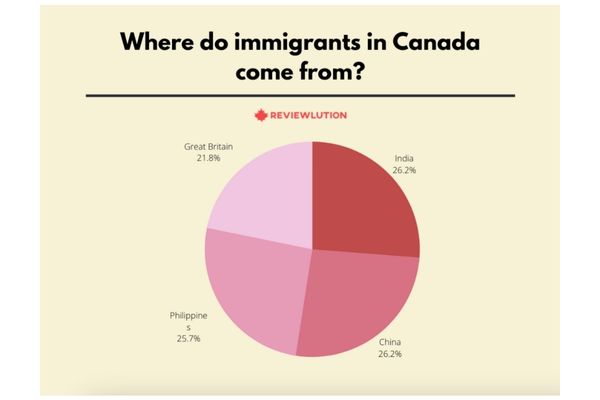 Although Canada doesn’t have as many minorities as the US, it doesn’t lack diversity. Canada’s race demographics state that approximately 15.6% of Canadians consider themselves a minority.

Furthermore, when analyzing the future prevalence of different races, studies estimate that people of colour will make up about a third (31% to 36%) of the population of Canada.

According to the 2016 census, over 32% of residents declared themselves Canadian, followed by 18.3% with English roots. The other large ethnic groups were Scottish, French and Irish.

Interestingly enough, Canadians were not the majority group. In fact, approximately 51.6% of inhabitants ticked the “Other” box regarding their ethnicity. This might be because many people can recognize more than one ethnic origin.

Unsurprisingly, Christianity is the most widespread religion in Canada, with 63.2% of respondents identifying as Christian. However, the next largest group is comprised of those with no religious beliefs, which make up 26.3% of Canadians.

Moreover, the Muslim population in Canada accounts for 3.7%, followed by 1.7% of Hindus, 1.4% of Buddhists, and 1% of Jews. Of course, other religions are also present, but their percentages are negligible, with less than 1% of respondents.

With such an exciting population profile, Canada proves as an excellent destination for both younger and older generations. Especially Ontario, as it seems that everybody flocks right there!

Hopefully, you’ve gained insight into the population of Canada. Now, go and impress your friends with this newfound knowledge!

How many people live in Canada?

According to the 2021 census, the population of Canada currently stands at 38,278,083 inhabitants.