Car accidents continue to take innumerable lives all around the world. While alcohol is the usual suspect and often blamed for most car crashes, there’s another important cause – texting and driving.

Texting and driving statistics from all over the world leave no doubt. Unfortunately, we’ve gotten so used to our smartphones that we’re unable not to put them aside even when our lives are in danger.

Today, we’ll dig deep into the latest texting and driving statistics for Canada. Even in the Great White North, so often hailed as one of the most orderly countries, this is a significant issue.

1. Each year, around 2000 Canadians are killed in motor vehicle accidents.

It’s important to note that the sheer number of car accidents and deaths is not necessarily the best indicator of road safety. What matters is the number of motor vehicle accident deaths per 100,000 residents. This is a standard ratio used by most countries, which allows for a quick and simple comparison.

Global driving statistics show that Canada is among the safest countries when it comes to car accident fatality rate. When we compare the road deaths from 1999 (2632) and 2018 (1922), it’s evident that Canada is getting safer and safer, even though the number of cars on the roads has gone up considerably.

We have to emphasize that riding a motorcycle in Canada is not necessarily safer than driving a car. All things being equal, motorcyclists are more likely to be involved in accidents. However, the proportion of motorcyclists among Canadian road fatalities is still quite low.

Canada has improved its road safety in this respect, too. This becomes obvious when we compare the current situation with that in 1999, at which point there were 218,457 road injuries.

In 2018, there were 9,494 serious injuries – once again a significant decrease compared to 1999 when 16,187 Canadians were seriously injured in car accidents.

The total death and injury toll cost around $37 billion annually (about 2% of Canada’s GDP).

5. Drinking and driving statistics for Canada show that alcohol is still by far the most significant cause for concern for Canada’s road safety.

Young drivers (aged 16-24) account for 32% of drunk drivers involved in fatal car accidents. Around 30% of drunk drivers were going above the limit at the time of a fatal crash. Most of them didn’t wear a seatbelt.

It’s important to note that the extent of consequences of drunk driving is probably being underestimated, as drunk drivers kill a lot of sober people.

6. According to the most recent car accident statistics by province, Yukon has the worst fatality ratio by far.

Ontario and Quebec are below the national average, with 4.2 and 4.3.

Interestingly enough, the fatality rate in certain provinces doesn’t correlate with the injury rate. For instance, Yukon has the highest fatality rate but a fairly average rate of injuries (444, compared to the national average of 412).

Although the general outlook is promising, the texting and driving stats for Canada show there’s no time to relax.

Data concerning the use of electronic devices on the road is usually referred to as distracted driving stats. The use of any kind of device falls within this category. So it’s not only texting and using a phone, though the latter is, of course, the most important cause of grim distracted driving facts.

There are other causes of distraction on the road, such as: 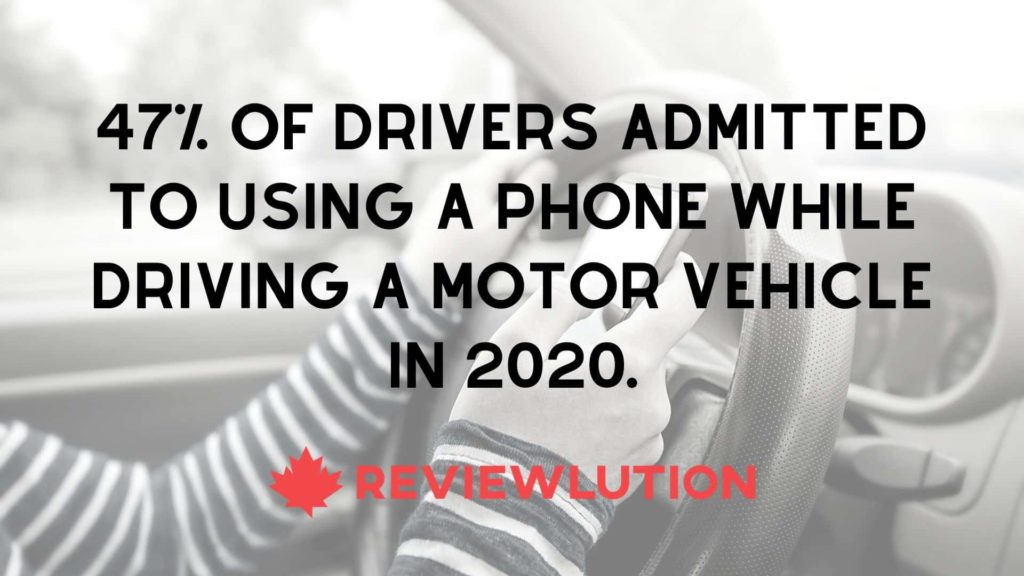 8. Distracted drivers are much more likely to be involved in a car accident – up to 3.6 x times!

Taking your eyes off the road for 5 seconds to read a message while driving at 90 km/h means that you’ll cross the length of a football field without looking. It’s practically the same as driving blindfolded for 5 seconds.

According to the CAA, distracted driving in Canada is generally recognized. However, more work is needed to educate the public on all the detrimental consequences of using electronic devices while driving.

Compared to impaired driving (driving under the influence of psychoactive substances), texting while driving facts are not as grim. Yet, they are slowly becoming a major cause of Canadian car crash fatalities and injuries.

Around 1,500 road fatalities are caused by impaired driving, which usually involves alcohol. Other substances, like marijuana, methamphetamines, cocaine, etc., can also cause car crashes.

10. Police estimations and statistics on texting and driving show that distracted driving might replace impaired driving as the major cause of death and injuries on the road.

According to the initial texting and driving statistics by age, younger residents are more likely to use a phone while driving, with 55% admitting to doing it in the last 7 days.

In 2011, the population average was 37%, which means that older drivers are generally not inclined to text, talk, or use electronic devices while driving. Older citizens, however, are still more likely to cause a car accident due to the normal cognitive consequences of aging.

11. 33% of Canadians use a phone while waiting for the green light, texting and driving statistics from Canada reveal.

Moreover, hands-free phone use doesn’t mean you’re safe. A distraction of any kind is dangerous. In 2019, 25% of surveyed Canadians said they text while driving.

We’ve mentioned that it may be more challenging for the police to enforce the rules against the use of phones on the road. Similarly, it’s a challenge to identify all the cases when distracted driving caused an accident.

12. According to texting and driving statistics from 2020, Canadians react positively to the increase in fines for using a phone while driving.

A Desjardins survey from 2020 tells us about how Canadians react to measures used to minimize the use of smartphones and other electronic devices while driving.

Cell phone statistics for Canada show that the use of electronic devices is on the rise, and there isn’t much the government can do about this. However,  we see that it can at least impose harsh measures for those who use tech devices irresponsibly.

The drives themselves (41%)  report that getting into an accident would make them reconsider using a cell phone while driving. High fines (26% of drivers) and increasing insurance premiums (21%) also stand out as the biggest reasons not to text while driving.

13. Reducing the number of drivers who use tech devices can only be possible through the joint action of various Canadian institutions.

Certain institutions, like the Canadian Institute of Traffic and Transportation, deal with logistics and maximizing the efficiency of transport. Reducing the number of accidents linked to distracted driving is one tool in the arsenal of logistics technicians.

But that’s not all:

However, we can still draw conclusions from the basic populational trends. It’s obvious that the government has to find a way to reduce people’s tendency towards using smartphones while operating a vehicle. We estimate that texting and driving statistics for Canada will change slowly over time, without large fluctuations.

How many deaths a year are caused by texting and driving in Canada?

How many accidents are caused by texting and driving in Canada?

Close to 1000 serious car accidents that involve fatal consequences and serious injuries are caused by texting and driving in Canada each year.

How many people die in car accidents in Canada?

2000 people die in car accidents in Canada each year.