An average game of poker lasts about one to three hours, while tournaments, like the World Series of Poker, can go on for two to five days.

But did you know that there are some poker games that reportedly lasted for 14 years?

What was the longest poker game in history? Who holds the world record for the longest online poker marathon?

Keep reading to get all the deets.

1. The Bird Cage Theater: The Longest Poker Game in History

The longest continuous poker game took place in the Bird Cage Theater in Tombstone, Arizona, USA. It was actually held in the basement of the establishment which served as a brothel and entertainment venue for the budding mining community.

The legendary poker game started in 1881 and lasted for an incredible 8 years, 5 months and 3 days. Infamous gamblers from all over the country congregated in the stuffy basement of the Bird Cage Theater and played poker round the clock —the buy-in was set at $1,000 (which would be a jaw-dropping $30,600 today). In fact, it is estimated that during the near-decade-long game $10 million changed hands, 10% of which went to the Bird Cage Theater.

On top of that, it is reported that some of the biggest legends of the Wild West, including Doc Holliday, Wyatt Earp, Bat Masterson and Adolphus Busch, took part in the famous card game.

The Bird Cage Theater closed down in 1892 (3 years after the game ended) when the silver mines of Tombstone could no longer provide a living for the residents of the region.

Today, the venue is a popular tourist attraction allowing visitors to see the room where the game was played as well as other Bird Cage artifacts, such as the original piano, staircase, bar and the 140 rogue bullet holes in the walls.

Related: How do casinos make money off poker?

2. Phil Laak: The World Record for the Longest Poker Session

Poker star Phil Laak currently holds the Guinness World Record for the longest poker marathon by an individual, which he broke when he played for 115 hours during a WSOP event at the Bellagio in Las Vegas in June 2010. This amazing feat was witnessed by a streaming audience of more than 117,000 people.

During almost five days of uninterrupted game, Laak was allowed to take 5-minute breaks every hour to take a shower (one was set up near the poker table) or use the bathroom. He chose to ‘bank’ these breaks (resting for only 5 minutes every three hours) and used the rest to take a 30-minute nap (the only one during the 115 hours of playtime). What’s even more astounding, is that he claims he did not consume any caffeine or other stimulants during that time.

At the end of the game, Laak won $6,766, half of which he donated to a children’s charity.

If you want a crack at a long poker game, you’ll first need to sharpen your poker-playing skills! 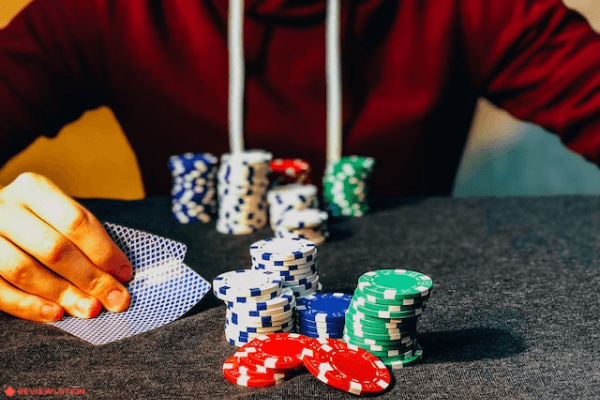 The previous world record for the longest poker tournament was set in 2012 when players took part in a 36-hour, 34 minutes and 41 seconds game in Delaware, USA.

According to the Guinness Book of World Records, the record for the longest marathon playing online poker was achieved by Dutch player Martin Hummel. Hummel played for a total of 48 hours, taking part in more than 40 No-Limit Texas Hold’em tournaments, managing to finish as high as 36th and as low as 1,944st.

In between tournaments, he played cash games on PokerStars, one of the top-rated real-money poker sites in the world.

The entire attempt, taking place in Utrecht, Netherlands in April 2021, was streamed via Hummel’s Twitch channel.

How to get your poker face on? Here is a detailed guide explaining everything you need to know about bluffing in poker.

Hartland, Vermont native Larry Olmsted held the world record for the longest poker session for five years. The record was set in 2004 at one of the biggest and most famous casinos on the planet, the Foxwood Casino in Connecticut, USA where Olmsted played a game of Texas Hold ‘Em for almost three days straight.

During the 72 hours of playtime, Olmsted took occasional bathroom breaks but he never left the poker area and in the end, he acquired $1,000 in winnings, most of which he gave away in tips to the casino staff.

Fun fact: Larry drank more than 30 cups of coffee during his poker run.

5 years later after Olmsted broke the world record for poker endurance, Paul Zimbler, aka “The Marbella Kid”, managed to play the longest game of poker at the WSOP Europe Event in the UK. The game lasted for a staggering 78 hours and 20 minutes.

According to multiple sources, the Dun Glen Hotel, located in the once-booming industrial town of Thurmond in West Virginia, was home to the longest poker game ever played, stretching an incredible 14 years.

Unfortunately, not much is known about the specific poker game and to this day it remains an urban legend.

How long is a poker game?

A standard poker game lasts from 1 to 3 hours, depending on the number of players, the number of chips, and the players’ willingness to take risks and bet high. On the other hand, poker tournaments can last from two to five days.

Can a poker game go on forever?

In theory yes, as cash games do not have an official end, i.e. the player can always choose to re-buy if they lose all their chips. Tournaments are a different story—these end when a player wins all the chips in play.

What was the longest poker game ever played?

The longest continuous poker game took place in the Bird Cage Theater in Tombstone, Arizona and ran for an incredible 8 years, 5 months, and 3 days. Officially though, the world record for the longest game of poker is held by Phil Laak and his incredible 115 hours of play.