Gambling is one of the oldest pastimes. It’s been around for thousands of years and will most likely stay with us. This is why gambling statistics are vital, as they help us keep an eye on this risky activity. After all, without gambling facts, there’s no way we can control this activity.

Today, we’ll focus on gambling statistics from Canada and more:

We’ll look into everything from global stats, the number of people involved in gambling, and the total revenue to more worrisome topics such as gambling addiction, social problems, and detrimental consequences of gambling.

Modern technologies have made gambling just a few clicks away. There are practically no obstacles or limitations. That’s why it’s crucial to monitor gamblers’ behaviour closely, as we do with all actions that may lead to addiction and grave social issues, such as crime, poverty, debt, etc.

1. There are around 350 million problematic gamblers around the world.

It’s impossible to mitigate the pessimism lurking behind this simple fact.

In certain countries, the prevalence of problematic gambling surpasses 5.8%. The World Health Organization recognizes the increased availability of online gambling and co-occurrence of gaming addiction and gambling addiction. However, we have to note that studies most often focus on problematic gambling. So, the actual number of people who are involved in these activities is most certainly much larger.

The harm of gambling is comparable to that of alcoholism and depression, which are notorious for their negative social consequences that span far beyond those who actually have a disorder. Click To Tweet

Those who provide gambling facilities are marking record revenues each year. One thing is certain:

The amount of money lost to gambling each year is roughly the size of the annual GDP of a small developed country like Austria.

The World Health Organization reported in 2016 that most money is still being lost in casinos (more than $100 billion annually), lotteries, and gaming machines. However, online gambling is the fastest-growing branch, with the COVID-19 pandemic practically forcing most people to resort to this method.

Asia generally has the highest proportions of problematic gamblers, and the EU the lowest. North America is somewhere in-between.

3. Even moderate or low-risk gamblers cause social problems and harm.

To begin with, it’s tough to discern problematic from non-problematic gambling. According to the American Psychiatric Association, a gambling disorder diagnosis is warranted if four clinically significant symptoms are present over at least one year.

Some of the symptoms include:

It’s obvious why many people indulge in gambling without meeting the criteria for the official diagnosis. But, in turn, it’s not surprising that many individuals who don’t meet the criteria still have a lot of individual and social problems.

4. More than 2% of Canadians older than 15 have risky gambling habits.

Furthermore, around 75% of all Canadians have participated in gambling. According to gambling statistics for Canada from 2018, there are around 0.6% problematic gamblers in Canada, which is far below the global average.

Still, around 2.7% of all Canadians were identified as risky gamblers. As far as provincial compulsive gambling statistics for Canada are concerned, there are no significant differences.

Online gambling addiction isn’t much different from the “traditional” form. In fact, it will probably become the most prevalent form of a gambling problem, as younger generations will be more likely to indulge in this form of self-destructive behaviour. 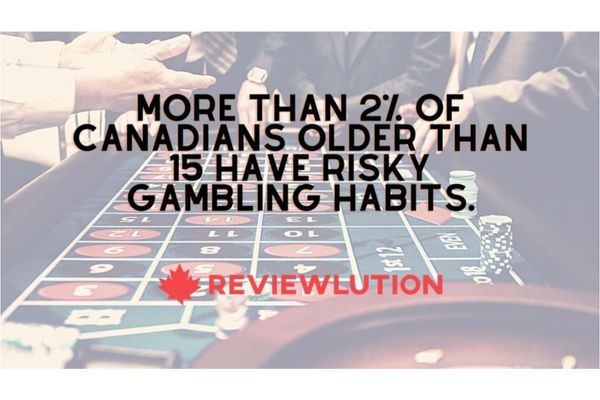 In this period, Canada has been steadily marching towards an enviable achievement. As a result, the Great White North is now one of the few countries in the world that have succeeded in educating their population. Additionally, they’ve provided “inoculation” to the temptations of casinos, lotteries, and EGMs (electronic gambling machines).

But it’s not all great news:

Although the main Canadian gambling facts are promising, the anti-gambling initiatives in Canada still cannot let their guard down. That’s because yearly gambling revenue per gambler has actually increased slightly between 2002 and 2018 – from $453 to $503. It’s also possible that problematic gamblers spend even more money than before.

6. Gambling addiction is generally accepted as a mitigating factor in Canadian trials.

This info comes from only one EGM venue – the unlucky recorder managed to lose almost three-quarters of a million while visiting the same EGM venue a whopping 294 times in one year. This record holder averaged an eye-watering $2,385 bet per visit.

It’s important to note that gambling addiction statistics like these are pretty hard to come by.

Gambling companies don’t really like sharing information about their most loyal “customers.” Why would they?

The info reported here comes from the so-called “Winner’s Circle” loyalty program implemented in Ontario after 2010. Simply put, “Winner’s Circle” awarded “standard,” “silver,” or “gold” status to most loyal gamblers, with respect to the amount of money invested in gambling.

To do this, it was necessary to keep track of gamblers’ tally. So, one news agency managed to obtain this sensitive info coming from one EGM venue in Ontario.

It’s not like this unlucky bettor was alone at the top. The second biggest gambler in that same venue bet $636,000 over 92 visits. This actually makes him yet another record holder if we consider that he lost more than $6,000 each time he visited his favourite gambling place.

The top 10 members of the “Winner’s Program” lost $455,000 on average. So, it’s not surprising that 2% of the most serious gamblers account for a massive 76% of the program’s revenues.

Enjoy some safe and responsible fun at the best online casinos in Canada!

Gambling Demographics and other Facts

9. Most serious gamblers are males.

The situation here is similar to alcoholism and most other substance abuse disorders. We still don’t know precisely why this is the case. However, it’s likely that in most cultures, men are “driven” towards substance abuse (and gambling) as a way to cope with psychological issues.

Seemingly outdated surrounding men’s and women’s mental health are still very much alive. In many countries, it seems more acceptable for a man to indulge in addictions than to seek emotional help.

Inversely, women are discouraged in most cultures from participating in activities that are likely to cause addiction. That being said, women are more likely than men to be diagnosed with various disorders related to depression and anxiety.

Gambling is more and more readily available in Canada. Even if we disregard online gambling in Canada, which has, of course, increased the overall availability of gambling, the number of EGMs per 1000 people has also slightly increased between 2002 and 2018 – from 3.2 to 3.4.

Researchers believe that Canadians haven’t changed their gambling despite the increasing availability due to adaptation. In other words, Canadians have learned how to abstain from gambling and are growing more and more indifferent to it. On the other hand, sports betting is gaining in popularity.

According to gambling statistics for Canada from 2019, 65% of Canadians occasionally play the lottery. Additionally, 36% prefer lucky scratchies, with 22% mentioning casinos as their favourite gambling activity. Of those, around a half play slot machines.

Read more: What are the Odds of Winning the Lotto Max?

12. Ontario has the largest gambling revenues (or losses) of any province by far – $3.8 billion.

13. Most people who gamble are between 35 and 50 years of age, gambling statistics for Canada confirm.

In this respect, stereotypes are very much relevant:

Interestingly enough, slot players are usually older than 55 years. Perhaps this is due to the slot machine boom in the second half of the 20th century. At the time, this form of gambling used to be the equivalent of online gambling today.

In 2017, the total revenue amounted to around US$13 billion or around $16 billion. This might seem like a significant rise; however, it can be attributed to changing gambling habits of a proportion of gamblers and an increasing population.

Canadian gambling facts show that casinos and lottery are by far the most significant contributors to the total revenue, with VLTs (video lottery terminals) and other gambling forms only accounting for a small proportion of total revenue. We have to note that Canadian online gambling stats aren’t included in this report, as this info is gathered in different ways.

In most provinces, people have to have at least 19 years of age to gamble, except in Alberta, Manitoba, Quebec, and Ottawa, where the casino age is 18.

16. Canada is eighth in the world in terms of gambling online.

There are more and more Canadian gambling sites each year. So, of course, this contributes to the status of the Canadian gaming industry.

It should be noted that regulations surrounding Canadian online gambling are rather strict. This discourages a further proliferation of this branch, which is why a large proportion of Canadians choose foreign gambling sites.

The term “gaming” used in the context of gambling is entirely inappropriate. If anything, it’s proof that online casinos are trying to change the public opinion of the new form of gambling by using different terminology.

Generally speaking, Canada is handling the gambling problem quite effectively, as gambling statistics for Canada make clear. This is not surprising, as the country has strict gambling regulations and, most importantly, a population that is ready to “play by the rules.”

Canadian culture doesn’t encourage gambling in any way. So, those who do have problems are probably prompted by the community to seek professional help, which is readily available. Most Canadian gambling websites must include info on problem gambling and provide things like phone numbers for those who want to find help. Top Canadian online gambling sites even list the worst, dodgy websites that are known for devious tactics.

As is so often the case with Canada, we can only stand by and watch in awe how the Great White North is able to elegantly solve a problem that most other countries are struggling with.

What percentage of gamblers win?

It’s impossible to answer this question definitively. However, one thing is certain – the house always wins in the end. And you don’t need fancy gambling statistics to make this conclusion – casinos wouldn’t exist if they lost more than they made.

Who is the greatest gambler of all time?

Edward Thorp. This guy probably didn’t win the most money, but he is by far the smartest gambler. Being a mathematician, Thorp approached gambling as a mathematical problem and solved it brilliantly. Unfortunately, since his day, casinos have learned how to recognize smart people like Thorp, and his techniques are actually illegal in most places.

Which country has the biggest gambling problem?

Regarding gambling losses per capita – that’s most certainly Australia – with $US958 lost per capita. Of course, this doesn’t mean that every adult in Australia loses a grand each year. However, when gamblers’ losses are averaged across the whole nation, this is how much every person would lose.

How many people in Canada have a gambling addiction?

Very few – according to official gambling statistics for Canada, only around 0.6%, so less than 250,000 people.